We arrived Baku airport around 3:00 am and was cleared Immigration & Customs around 4:00 am.  The guys who came across the Caspian Sea by that cargo ship were there to pick us up in five cars; the rest went to the hotel by coach. At the hotel, I didn’t bother with food; just took a hot shower and off to bed.  I was up at 7:00 am, had a quick breakfast and at 8:30 am had to meet the Rotarians from the Rotary Club of Baku. 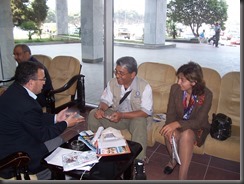 We didn’t have much time for socialising since we had to make a move to the Caucasus wef 10:00 am.  But it was nice of President Bakhtiyar Akhundov of RC Baku and his Rotarian colleagues to come to see me at such an early hour in the morning.  Had it not been for the ‘ferry fiasco’ (see Turkmenistan story) we would have a much leisurely pace to socialise with RC Baku.

From Baku we crossed the Caucasus mountains towards Tblisi in Georgia.  It was a very comfortable journey unlike our experiences in western Tibet.  The mountain roads were good and it was quite cool.  The next stop was a small town called Sheki and we had the pleasure of staying in a caravanserai.  This sturdy building has been duly renovated and fitted with modern amenities. But the look and feel was there, complete with the traditional tea room. It was very pleasant.

Sheki aka Shaki has many other names based on its ancient history dating back some 2,700 years (according to Wikipedia.)  Now it’s a quint little town of population around 63,000 souls, mostly Muslims. It’s situated in northern Azerbaijan quite close to the Russian border.