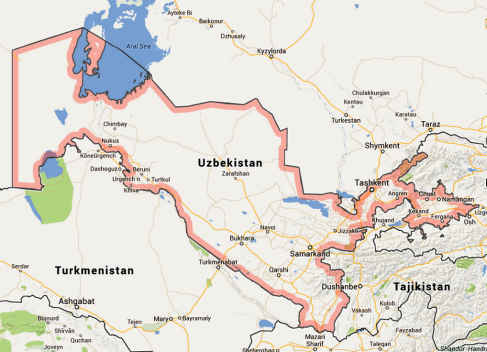 Tashkent
The hotel in Tashkent was very nice, the 4-star Tashkent Palace, I think. They even reserved hot food for our late dinner at 2:00 am. We were to have two days also in Tashkent. And there was really a lot to see; Tashkent being one of the centres of Islamic civilization and learning.

Samarkand
The next morning we departed for Samarkand, a name that rekindle memories of tales from the “1001 nights.” Again there was plenty to see and I was really looking forward to see for myself this famous old city founded c700 BC by the Sogdians.

Samarkand was also the capital of Amir Timur‘s (aka Tamerlane’s) Central Asian Empire. Soon after lunch, we were out on a tour of the city led by a lady tour guide who gave some very candid remarks about the history of the city and of Amir Timur.

Besides being a great Emperor who founded the Timurid dynasty, his grandson Ulugh Beg and great-great-great-grandson Babur Beg, extended the Empire to South Asia (the Mughal Empire until 1857.) He was also patron of the arts and thus had various buildings built to architectural excellence. According to the guide, one of his favourite wives also dedicated a mosque to him, designed by a renowned architect who became infatuated with her. When Timur returned from his campaign he learned about this liaison d’amour and the architect promptly lost his head. Bibi Khanym was spared because of her “undying” love for the Emperor. However, her indiscretion led to the introduction of the burqa to be worn by Muslim women henceforth. [This is just a story, by the way; it’s veracity needs some research.] This mosque still stands today and in use known as the Bibi Khanym mosque.

A visit to Samarkand is not complete without a visit to the Rajistan. This public square used to be a place for royal proclamations; it was also used for public executions. It is bounded by three madrasahs (Islamic schools) of exquisite architectural design. Nowadays, cultural shows are often held there.

There was plenty more to see. And one of them that I regretted not visiting was the Imam Bukhari mausoleum since it was located some km outside the city. But I didn’t know that it was on the way to Bukhara, our next destination.

Bukhara
Bukhara has existed for some 25 centuries. It was the most well known centre for Islamic learning in the glorious years of the Islamic civilization. I thought it derived its name from Imam Bukhari, but apparently not; although this famous scholar of the Hadith had his mausoleum nearby (near Samarkand in fact.)

It has been over a month now. It was getting boring; the monotonous sameness of the buildings and the environment was affecting me somewhat. I wasn’t keen to wander around anymore; I’d rather just relax, read a book or feast my eyes on their beautiful women. Little that I realised that soon enough in Turkmenistan (our next destination) we would be experiencing some real excitement.