It was in July 2005 when the new President of RC Pudu — Rtn Tai Chin Peow — took office that he mooted his project for the year as a Charity drive overland to London.  The committee under President Elect Rtn Ken Ong and International Service Director Rtn Leong Choy Ying got into the act and the project materialised. The Club piggy-backed on an experienced team of 4×4 Overlanders called the TAC Adventurers who already had 16 cars signed up with around 42 participants including wives and single women. But I was the only Rotarian that volunteered to go. I got my son Zaki to go along and we were teamed up with Sheikh Abas from Brunei. This being my first time undertaking such an adventure trip that would take two months to complete (covering two continents and 20 countries,) I was extremely excited. My wife was excited too and bought all kind of things — camping gear, food, utensils and such likes (which in hindsight were just excessive baggage.) She didn’t go, of course, because this kind of rugged outdoor stuff is not her “cup of tea.” And Sheikh Abas’ car got overweight!

Anyway, by early August we were ready to go.  And so it was that on 11 August that we said good-bye to our loved ones and departed at 6:30 am from the Shangri-la hotel, Kuala Lumpur for Nakhon Si Thammarat in Thailand. It was an uneventful journey and we were pleased to leave the haze soon after Ipoh.   On the following days we drove to Bangkok and then to Udon Thani before crossing the border into Laos.  Starting from Laos we had to drive on the right.  After a night stop at Luang Prabang we drove north to the border town of Mengla for crossing into China.  In China we were welcomed by a very heavy shower that helped to clean our rather dirty cars.

China is fascinating and I will be devoting a few posts on our experiences in China.

China is a big country.  Our estimated time to journey from the Laos/China border town of Mengla to Kashgar, the China/Kyrgyzstan border town was 21 days.  So to do China east to west would take more than one and a half month, I think.  Really China should have three time zones but for some reason best known to the authorities they have only one time zone ie GMT+8 just like Malaysia.  So for our journey over the 21 days we didn’t have to reset our watches at all.  China Mobile, the mobile phone service were very good and we were able to remain in contact with Malaysia all the way, even in the remotest of Tibetan towns.  Their maps were also good and GPS worked fine.  And that was in 2005.

It was on 16 August 2005 that we entered China from Laos.  Border crossing was quite smooth but since we were a big convoy of 16 cars, the formalities took some time especially for the cars; all were fully checked out before being given Chinese number plates. 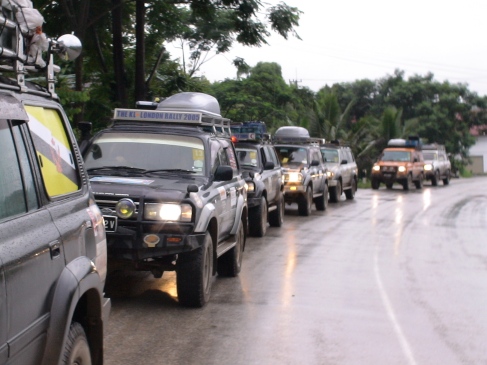 I’ve never been to this part of China before. It’s Yunnan province and very mountainous; beautiful and scenic though. I was looking forward to be in Lijiang where I read that there’s a tribal minority Chinese of Roman descent. Apparently during the days of the Roman Empire around 368 BC, some of the soldiers that were on a war mission to China didn’t go back to Rome, deserted their regiment and intermarried with the local women. Unfortunately, I didn’t see any of these “Roman Chinese” in Lijiang. 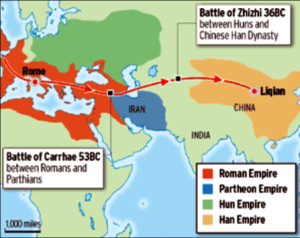 But Lijiang being known as the Venice of the East for their canals and waterways probably had something to do with the Romans. 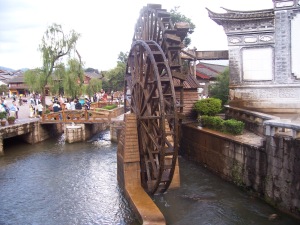 Onward to Lhasa
From Lijiang we drove on heading north-west towards Lhasa, the capital of Tibet Autonomous Region. We were ascending and in some places on rather primitive roads cut along the side of mountains with raging rivers below. Road works, however, were evident everywhere. [It’s now 2013, so I think one could drive a sedan car quite comfortably all the way to Lhasa.] But for 2005 it was all 4×4 offroad stuff. Very exciting and adrenalin pumping driving indeed. However, the scenery was just stunning and picture perfect. And Shangri-la gave us some real beauty of nature to be admired and cherished forever.

Our convoy doctor had prepared us for AMS (Acute Mountain Sickness) so no one really got sick except for our experienced Convoy Leader, who had sinus problems.  He was driving; misjudged a turn and brought his Landcruiser into a roll down a slope causing extensive damage to the car. Luckily he, his wife and passenger weren’t seriously hurt. The mechanics got to work on the car so that it could be driven all the way to Lhasa, where it’d be properly serviced and repaired.

We limped into Lhasa evening 24 August after a few mishaps.  My son, Zaki had diarrhea because he was curious to try Yak milk. Under such circumstances going to a “yukky” Chinese toilet was no problem.  But for me it was; and even today (2013) I found that Chinese toilets — the public ones especially though quite decent looking — would “stink to high heaven.”

Prior to arriving in Lhasa we had to camp; our first camping of the trip. Otherwise we stayed in no-star hotels until Lhasa where it was 3-star, I think. The camping was miserable because of the weather — cold and raining. So next morning nobody was in the mood to cook breakfast; we were just keen to break camp and move out to find a restaurant or something. Regretfully no restaurant. So it was agreed that we find a nice picnic spot and cook brunch (after all we had plenty of provisions.) That was a good decision because our Singaporean Aussie guy and his mainland Chinese wife whipped up excellent “nasi goreng.”

Richard Lang did a good job with the “nasi goreng”

On the “Roof of the World”

Lhasa is a beautiful city.  It’s the capital of Tibet and the centre of government for the Tibet Autonomous Region. It is also the centre for Tibetan Buddhism whose head, the Dalai Lama used to reside in the Potala Palace until 1959 when the 14th Dalai Lama fled to India during the Tibetan uprising.

We went up to the palace that is now a tourist attraction by walking up the hill for 210 m. That was some walk in rarefied atmosphere on the roof of the world. But I had to do it; that was one of the highlights of the trip and something to give me bragging rights. 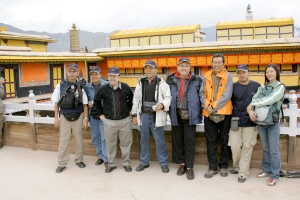 It has been about two weeks since we had a taste of Malaysian type food of rice, curry, roti or biryani. So when told by the hotel that there was a good Indian restaurant in the city, we made a beeline there. Oh it was great. 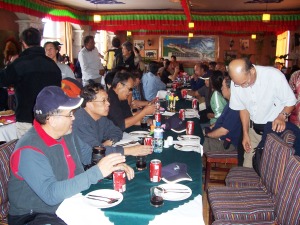 We had two nights in Lhasa enough time to have the cars serviced and repaired. We also had some people departing for home and work, and some joining us here. Our Convoy Leader and wife decided to fly out to Kunming for some medical attention after his nasty experience doing a roll downhill a few days ago. So leadership was handed down to his Deputy, a nice guy with callsign Y2K.

So what’s next on the agenda? Well a drive out to the base camp of Everest North face. On the way we’d stop at a few temples and monasteries, enjoy the fantastic scenery of the Tibetan plains with sheep and yaks grazing, turquoise lakes all over the place, and snow-capped Himalayas in the distance.